The Smart Forest City of the Future

Whenever we think of the future of architecture and urban planning there are normally two different ways we can imagine it. The first is the bright neon lights and signs, skyscrapers and smog like a cityscape straight out of Blade Runner The other imagined scene is a city that has become intertwined with nature, with plenty of foliage everywhere you turn, and buildings and structures inspired by nature. We could be closer to seeing that image become a reality, with the innovative Smart Forest City Cancun, designed by Stefano Boeri Architetti in Milan. The idea is that the city is powered by energy derived from the water and the sun, and everything you need is within either walking distance or an easy cycling distance.

The innovative city is focused on nature and sustainability and could be used as a blueprint for a functional, and viable future for urban centres in a time of great climate change and uncertainty. As we strive for sustainable approaches to all aspects of life, could this be the way that architects design our future as a planet.

Developers Grupo Karim created the city as an alternative plan to a new shopping district in Cancun, Mexico. The plan for the city is for the site (which is 557-hectare in size) to be reforested, and then become fully self-sufficient for both food and energy. The capacity of the city in terms of population is reasoned to be 130,000 people, with 260,000 trees planted in total. Alongside this there would be 7.5 million plants throughout 400-hectares of the site, all selected by landscape architect and botanist Laura Gatti.

The big idea of this smart forest city is that alongside complete self-sufficiency there is a real focus on nature. There would be plenty of public parks, private gardens, and green rooftops, with the city able to absorb 116,000 billion tonnes of carbon dioxide. Wanting to give back to nature and provide a real, efficient way of living for a population of the forest city requires more than just a nod to creating more green spaces, there has to be detail in the plans for how the city would effectively function. 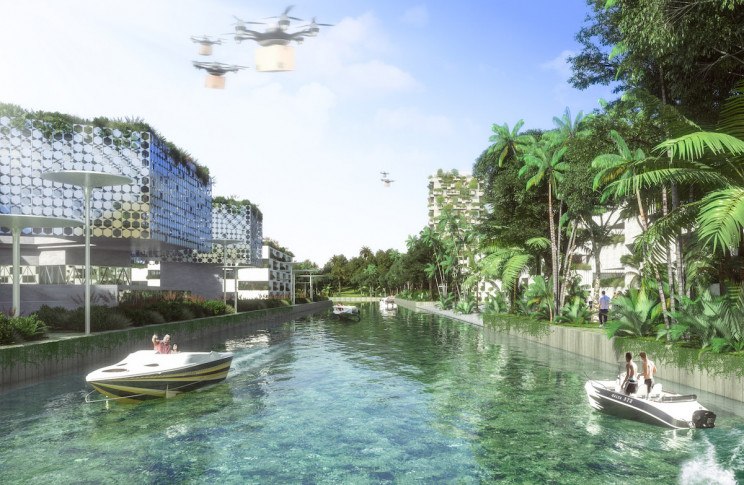 Transsolar are a German company that have stepped in to provide this detail, helping to surround the city with a ring of solar panels and an underwater maritime pipe to irrigate the agricultural fields. As with any large urban area, water is the key. There will be a massive basin near the entrance to the city, alongside a desalination tower. Canals will then distribute the desalinated water throughout the city, and water gardens will be created throughout the area to combat potential flooding.

For transportation functions and routes, residents would be asked to park any vehicles on the edge of the city, with the interior of the city working as a mobility in chain system. A fully electric and semi-automatic mobility system would be implemented, with residents also encouraged to walk and cycle everywhere. If successful, the city could become a beacon of hope for the future of urban planning worldwide.

The 10 Best Benefits of Growing Your Own Vegetable Garden

What are the Health Advantages of Hiring Cleaning Professionals?

The Best Outdoor Mouse Traps: How to Catch a Mouse Without Killing It

The 10 Best Benefits of Growing Your Own Vegetable Garden

What are the Health Advantages of Hiring Cleaning Professionals?

The Best Outdoor Mouse Traps: How to Catch a Mouse Without Killing It